A crystal lattice is defined as an array of points representing atoms, ions or molecules of a crystal, arranged at different sites in three dimensional space.

“Unit cell is the smallest part of the crystal lattice which possesses all the characteristic feature of the space lattice, that if repeated in three dimension generates the entire lattice. As brick is the unit cell of a wall.”

The stoichiometry density and spatial arrangement of the unit cell are equivalent to those of the whole crystal.

The unit cell of all different lattices are similar in having eight corners, however, they differ by the length of their edges (a, b and c) and by the angles opposite to them (α, β,γ).

α -Angle: It is the angle opposite to edge a i-e, the angle between the edges b and c.

β-Angle: It is the angle opposite to edge b i-e, the angle between the edges c and a.

γ-Angle: It is the angle opposite to edge c i-e, the angle between the edges a and b.

There are seven types of unit cells known as seven basic crystal systems. The crystals of all the substances ever discovered can be described by this small set of unit cells. 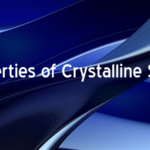 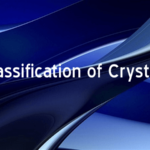